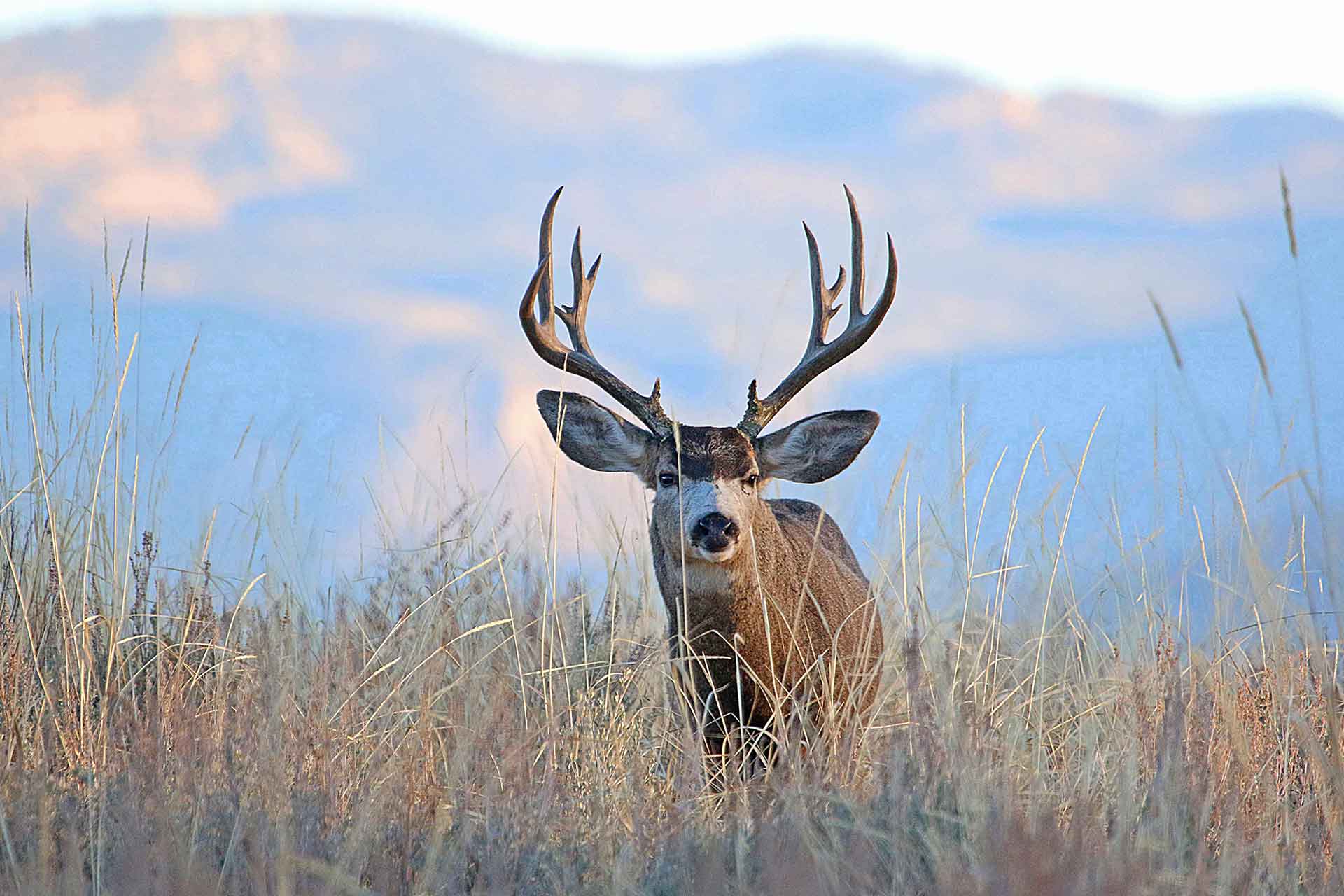 Some things you should know about mule deer

Rocky Mountain mule deer, Odocoileus hemionus, are found throughout Utah and live in many types of habitats, from rugged mountain wilderness to urban neighborhoods. The animal gets its name from its large mule-like ears.

Female deer (does), typically give birth to one or two offspring (fawns) in late spring or early summer. Only male deer (bucks) have antlers, which they shed and regrow every year. 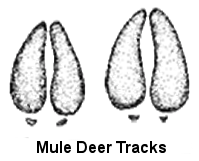 Mule deer have the broadest distribution of any antlered game animal in North America — ranging from northern Canada to central Mexico. In Utah, mule deer migrate annually, moving from summer range in high mountain habitats to lower elevations in the winter to avoid deep snow and to find food.

Almost all foothill bench areas as well as many valley floors are traditional wintering and foraging areas for mule deer.

Mule deer can be seen throughout the year and are mainly active at dusk and dawn. In winter, they may be active throughout the day. The main prey of cougars is deer, so cougars will be found wherever deer are.

Mule deer are among the most watchable Utah wildlife, and can generally be seen throughout the state during all seasons of the year.

Deer are ruminants — mammals that acquire nutrients from plant-based food by fermenting it in a specialized stomach before digestion.

Deer have four-part stomachs, and each stomach chamber progressively breaks down woody, leafy and grassy foods into smaller particles. These stomach chambers contain microbes that are essential to digesting food. The type of microbes in a deer’s digestive system gradually change throughout the year and are very specific to the food that is available each season.

From late spring to early fall, deer gain weight and build up fat reserves by feeding heavily on broad-leafed plants and grasses. During the winter, deer primarily feed on sagebrush and other woody plants, relying upon stored body fat to survive.

While well-intentioned people try to help deer by feeding them, they can harm them instead.

Feeding mule deer is strongly discouraged due to public safety concerns, the spread of chronic wasting disease among deer, elk and moose, and potential harm to wildlife from introducing foods not in their diets, particularly during winter months. While it is not illegal to feed wildlife — except for in certain cities that have enacted no feeding ordinances — there are several reasons that it is highly discouraged:

Preventing damage on your property 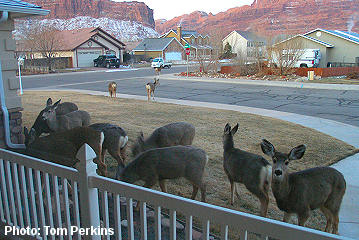 Most foothill areas, bench areas and valley floors are traditional wintering and foraging areas for deer. In order to find alternate food sources, mule deer may end up in people’s yards or gardens, especially during periods of drought in the summer and to avoid heavy snow in winter. If you want to try to save your plants and minimize any property damage from these wildlife visits, here are a few tips:

While deer are not predators, they are still wild animals. It is especially dangerous when mule deer and other wild animals become habituated to urban environments or lose their fear of people. Some things to keep in mind:

If you have an encounter with aggressive wildlife or see animals that look sick or are injured, please report it to the nearest Utah Division of Wildlife Resources office. If the encounter or sighting occurs after hours or on the weekend, please call your local police department or county sheriff’s office, who can contact a conservation officer to handle the situation.