Badgers (Taxidea taxus) are members of the weasel family and are common in the grasslands and deserts of Utah. They are distinguishable by their long, gray guard hairs, black cheek spots and a white stripe extending from the nose to the forehead.

Adults may weigh 14–22 lbs. They have strong, short legs and long claws on their front feet adapted for digging. They use these claws to dig for burrowing rodents such as ground squirrels and prairie dogs. 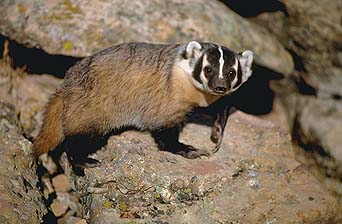 High concentrations of rodents, especially ground squirrels, can attract badgers to some unlikely habitats, such as urban areas, parks and along roadsides.

Badgers are usually nocturnal, but can sometimes be seen at dawn and dusk. They can put on aggressive displays when cornered, but are unlikely to attack unless highly provoked. They may hiss, growl, or snarl. Females will be more aggressive during the spring months when they have young in a burrow. Larger predators like cougars, coyotes, eagles and bears will prey on badgers.

Most conflicts result from their digging for prey animals in unwanted areas. Badger holes can be hazardous to livestock.

Although rodents are their main prey, badgers are opportunistic and may eat insects, birds, eggs, reptiles and some vegetation. They will sometimes prey on small pets, lambs and poultry, which brings them into conflict with humans. They are solitary animals, only coming together during the summer breeding season. Two to five young are born in burrows in early spring. The young stay with their mother until about one year of age.

Badgers are protected and classified as furbearers and they are managed through regulated trapping seasons.